Transport for New Homes has published a report on Garden Towns and Villages raising concerns that their planning and layout will perpetuate the dominance of motor vehicles and dependence on them.
Garden Towns and Villages is a government initiative to tackle the housing shortage in the UK. More than 50 garden towns and villages are planned aimed at creating new sociable, green communities within walking distance of town centres and with sustainable transport systems.

Taunton is a designated Garden Town and is one of the case studies in the report. The report says: “Most are planned in the wrong locations, far from town centres and rail stations. They lack local facilities and their streets are designed around car use. Funding for walking, cycling and public transport is missing.
Sustainable transport is vital to tackling the climate crisis. Walking and cycling in particular have come to prominence during the health crisis, as have the benefits of living more locally. But the housing that we are planning threatens to take us in the opposite direction, locking us into car-dependent lifestyles for decades to come.”

TACC encourages you to read the report and join us in working to ensure local authorities in Taunton work to preserve and develop the vision of the garden town in their planning decisions.

Recent weeks have seen a surge in cycling. To help key workers take to two wheels, Taunton Area Cycling Campaign is organising two Dr Bike sessions where a qualified bike mechanic from On Your Bike will check your bike over for you.
These are on:
– 21 July, 10-2 at Musgrove Hospital for hospital staff,
– 28 July, 11-1 at CICCIC, Paul Street in the garden facing Billetfield, open to all key workers. 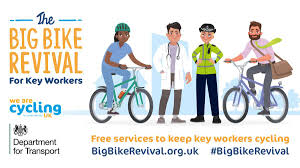 To book a quarter hour slot email saying which slot you would like. We’ll try to fit you in as closely as possible with your preferred slot.

This project is funded by the Department for Transport as part of Big Bike Revival. The Dr Bike will be provided by On Your Bike.

Free one to one cycle confidence and skills training is also available, to all adults. It is provided by our friendly qualified trainer and take one or two hours. Please email to make arrangements.

Social distancing: pop up space for walking and cycling

TACC has been asking the leader of Somerset County Council to introduce space for walking and cycling to enable social distancing. We particularly suggested that they consider these routes:

Thanks to Magic Little Grants, TACC can now offer more one to one confidence sessions. They are aimed at people who want to build confidence and skills in doing say to day bike journeys. They are provided by our qualified cycle training instructor, Nick Warner, and typically are 1 to 2 hours.

This is what one person said: “Nick who carried out the session is an experienced cyclist and he tailored the session to meet my specific needs. It was carried out in Taunton for 90 minutes and I now feel much more confident around bike safety and care, and also being safe on the roads. I would highly recommend this session to those who can already ride but lack the confidence to ride on the roads.”

If you would like to take advantage, please email us.

Supporters of TACC presented their petition to Councillor John Woodman, Cabinet Member for Highways at Somerset County Council on 10 January. The petition (both paper and online) is signed by 1800 local residents. The petition asks Somerset County Council (SCC) and Somerset West and Taunton Council (SWT) to prioritise and develop a major bid for Government funds for cycling infrastructure.

Pip Sheard, Chair of TACC said: “Our work shows that many people would like to cycle but safe infrastructure is needed to enable them to. More cycling will create large environmental, health and social benefits.

In their Climate Emergency Framework documents, both local Councils identify more cycling as a way to reduce local CO2 emissions from transport calculated at 50% of all Somerset West and Taunton’s emissions. Swopping the car for a bike on a local journey reduces your carbon emissions to zero.

Over the summer, TACC supporters spent a considerable amount of time working with Somerset County Council officers and cycling the town looking at current cycling routes and how they could be improved. Some of this work has been sent to the Government in a document called the Local Cycling and Walking Infrastructure Plan (LCWIP) but now the proposed improvements need funding.”

TACC asks SCC to:
1. Lobby the Government working with our MP to ask them to set up a national dedicated cycling fund as part of the Government’s developing Infrastructure Plan.
2. Ask the Government that this national cycling fund be sufficient so towns like Taunton, Bridgwater and Yeovil all have a serious chance of getting funds.
3. To support the bid for a Somerset County Council budget for cycling at the Council’s February budget meeting.
4. To write to his officers to ask them to adopt the new proposed Department for Transport Cycle Design Advice and Chapter Six of Traffic Signs Manual, which reflects some of the guidance.
Next Page » « Previous Page

This was the lead vehicle for the demo against LTN’s in Islington yesterday. Also, parked in a bus lane for over an hour.

Car dooring is a very real fear for cyclists.

That's why we're proposing the Dutch Reach - using the hand furthest from the car door to open it - to be included in the #HighwayCode.

It's a simple change of habit that can save lives.

This image of the Dutch prime minister shows what the Bicycle is all about: easily and safely biking to work, while nonchalantly eating an apple. That's what millions of Dutch people do daily, regardless their social class or income. 🚲
image source: https://www.volkskrant.nl/nieuws-achtergrond/rutte-iii-doet-het-ook-op-links-goed-kabinet-voelt-stemming-in-het-land-goed-aan~bef753f8/