Cllr John Woodman, cabinet member for Highways and Transportation  took up our invitation to join a ride around some the cycle network in Taunton. Accompanied by public health and highways officers and members of TACC, Cllr Woodman experienced for himself the good, the bad and the ugly of the cycle routes and highway design in the town, following a circuit from County Hall, via Wellington Road, French Weir, Trenchard Way, Winkworth Way, Duke Street and the Parade. 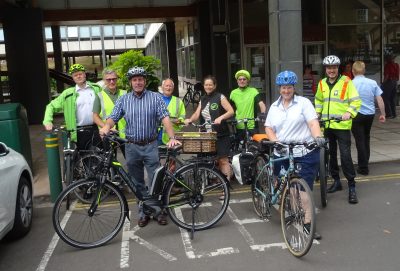 Among the problems highlighted were discontinuous cycleways alongside main roads, where people on bikes have to give way to minor roads, and difficult junctions at Compass Hill and Priory Park roundabout. An old but very good piece of cycleway design was highlighted at Winkworth Way, where there is a separate cycleway and pavement, a design preferred by both cyclists and pedestrians to the more recent shared pavements approach. The tour also highlighted the need to connect the network where there are missing links, to enable people of all ages and abilities to cycle without fear of fast moving and heavy motor traffic.

It was also an opportunity for Cllr Woodman to try an e-bike for the first time, kindly loaned for the day by Nationwide E-bikes on Priorswood Road.

Cllr Woodman said: “I gained an understanding of what the problems are and how they could be addressed. The council will shortly start work on a new Cycling and Walking Infrastructure Plan, to which TACC will be invited to contribute. The more people that cycle, the less traffic congestion and pollution we will have, and of course those people who do cycle will be healthier and fitter, which is great news for the NHS and social care.“